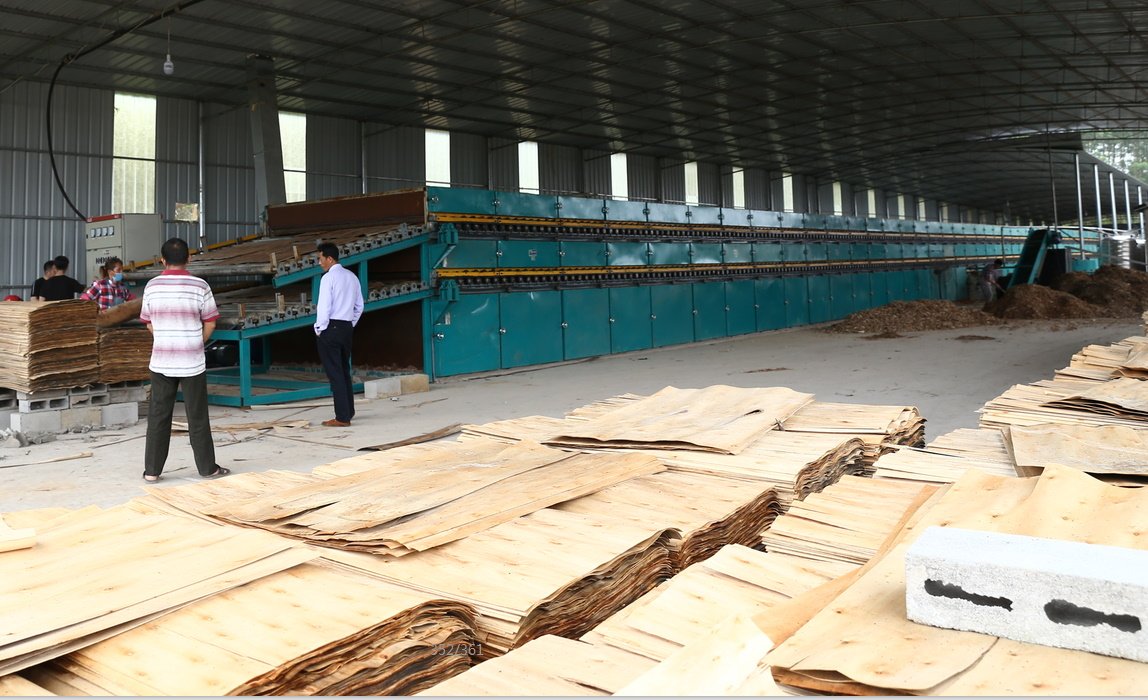 The peeled veneer has a high moisture content (M/C) ranging from 30% to 110%. The M/C is determined by wood species, heartwood/sapwood ratio, heat treatment, etc.

In order to continue with the gluing and hot press process of plywood making, the veneers must go through a drying process. Veneer drying can be done by natural circumstances or veneer dryer.

The over amount moisture in the veneer can affect the spread of glue on the veneer surface. Wrong material can cause blister, glue penetration, glue peeling, etc.

High moisture veneer is not suitable for hot press process of plywood manufacturing. It will prolong the hot press time and discount the quality of wood panels.

Water exist naturally in the wood fiber. It moves along with the direction of wood fibers.

However, the veneer is a long size thin layer, the moisture goes out of the veneer mainly by lateral direction in the veneer drying process.

Veneer drying is a forced evaporation of moisture by heating in a modern veneer dryer or drying machine. In China plywood industry, this process is done with a dryer or natural drying.

When the veneer first comes into contact with hot air, the surface temperature is low, and the vapor pressure of free water is lower than that of hot air. The moisture in the veneer cannot evaporate, and the heat in the hot air is mainly used for surface heating.

This time is very short during the veneer drying process.

The water evaporated on the surface is mainly supplemented by the capillary conduction near the surface. With the extension of the internal water conduction distance, the resistance becomes larger and larger, and the time for the evaporation rate to be consistent with the diffusion rate of the water inside the wood is very short. Therefore, the constant drying time is also very short.

This period can be divided into two stages: the first stage and the second stage.

In the first stage, the temperature of the veneer generally remains at the wet-bulb temperature, and the speed of the internal water movement begins to be lower than the surface evaporation rate. Part of the surface is dried below the fiber saturation point. As the drying progresses, the internal moisture diffusion resistance increases and the drying speed of the veneer gradually decreases. In this stage, the free water has basically been evaporated, and most of the absorbed water has also been evaporated. This is the main stage of veneer drying.

Only part of the veneer in the second stage absorbs water, because the microcapillary shrinks and the gap becomes smaller, which makes it more difficult for water to move. Basically, the movement in the vapor state is the mainstay. At this stage, the heat supplied by the hot air removes evaporation In addition to moisture, the temperature of the veneer gradually rises until it approaches the dry bulb temperature

Open chat
Chat With Us On Whatsapp