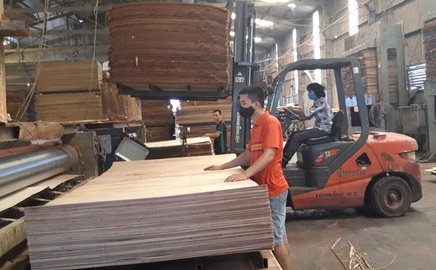 Vietnam News Agency reported on July 7th that despite the continued spread of the world epidemic, Vietnam’s plywood exports still show good development momentum, while also facing more and more dumping and evasion from the two largest markets in South Korea and the United States Allegations of trade remedies.

The Vietnam Timber and Forest Products Association held a conference on “Promoting the Development of Vietnam’s Plywood and MDF Trade under the Background of the Novel Coronavirus Outbreak – Opportunities and Challenges” in Ho Chi Minh City on July 6.

Du Chunli, chairman of the Vietnam Timber and Forest Products Association, said that in recent years, the trend of wooden furniture design has led to the vigorous development of the Vietnamese plywood industry, and the export value has continued to grow exponentially. However, the rapid growth of exports in a short period of time is also the reason why plywood faces more and more trade risks.

U.S. to Probe Whether Plywood Imports from Vietnam Circumvent Duties on Chinese Goods

In addition to the United States, at the end of 2019, the Korea Trade Commission (KTC) conducted an anti-dumping investigation against six plywood exporters in Vietnam. On April 24, 2020, the committee announced its preliminary investigation results and imposed anti-dumping duties of 9.18% to 10.56% on plywood from Vietnam. The temporary tax rate applies from May 29 to September 28, 2020. The Ministry of Industry and Trade has formally asked that the Republic of Korea consider imposing a reasonable tax rate based on provisions outlined in the Vietnam-Korea Free Trade Agreement.

Wu Shihuai, vice chairman and secretary general of the Vietnam Timber and Forest Products Association, said that in the context of the accelerating globalization process, there are more and more cases of anti-dumping investigations on plywood from Vietnam. In addition, the US-China trade war has put many export industries in Vietnam in danger of cargo transshipment and tax evasion. If the origin of the product cannot be proven, Vietnamese plywood may face the risk of being levied an anti-dumping duty of more than 200% by the United States, like Chinese plywood.

Li Chunjun, chairman of the Vietnam Nano Furniture and Construction Company, believes that the Timber Association must review the export activities of member companies to find anomalies between production capacity and export volume. If fraud is discovered, such as the smuggling of goods from China, it must be notified to the relevant authorities for strict handling.

In the context of fierce competition, even if individual companies engage in illegal business, the entire timber processing industry with huge potential in Vietnam will pay an extremely high price.

The fact that the amount of wood harvested annually in Vietnam is sufficient to produce 8.4 million cubic meters of plywood, four times higher than the exported volume, may help the country win over US accusations of the product using Chinese components to circumvent US duties on imports from China. See more at: https://vietreader.com/business/1768-vietnam-plywood-may-escape-us-anti-dumping-probe.html